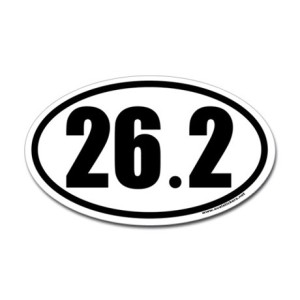 We have all seen them. Some of us have them. Those stickers on the backs of cars proclaiming 26.2 or 13.1, or even 140.6 (Ironman Triathlon distance). And I just can’t seem to put one on my car. Does that mean I can’t run anything more or less than a marathon? Will I be stuck with the 26.2-mile distance forever if it’s proclaimed on the back of my car?

For as long as I can remember, I have called myself a marathon runner because it is, by far, my favorite distance. And then last year, I tip-toed into the world of ultra marathons. Experimenting with just a 50K first, I quietly set my sights on a 40-miler this year. Yet even after completing this longer ultra, I continue to crave the speed of a road marathon. More than once I’ve pondered, what am I supposed to call myself now? There are no “26.2 + 50K + 40” stickers, to my knowledge.

My running career began when I was in elementary school and evolved with track and cross country into college. By the time I graduated, I had run plenty of 5K’s and 10K’s and was ready to push myself further.  That’s when the marathon distance became so appealing, and qualifying for the Boston Marathon became my goal. Seven years and six marathons later, I qualified for and ran Boston. I even got a tattoo the day after (before a Red Sox game) to commemorate the achievement. I had accomplished my goal. Now what? 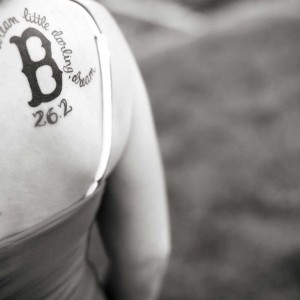 Trying to identify another running goal has been tough for me over the past seven years. Boston was “IT.”  I didn’t have another step. So I took time off to have kids, and then continued to train for and run more marathons. But I was lost. Feeling like I was stuck in a rut, I signed up for a two-day running relay with a team of people I hardly knew, and re-discovered my love for running through camaraderie. I realized that I didn’t need a goal to identify myself as a runner, I just needed new adventures, new experiences, and new running friends to inspire me. This has fueled my running over the past two years, and I’m a better person (and runner) because of it.

While I will never forget my experience qualifying for, and running the Boston Marathon, I no longer need a goal to identify myself as a runner. I run 10K’s, 50K’s, and yes, marathons.  If you run, then you’re a runner. No matter the distance. While those stickers might be a hard-earned badge of pride, don’t let them keep you from pushing yourself to that next goal. – Amy Clark
Amy is a runner, writer, mama of twins and is founder of the website, RunningBend.com. She lives (and runs) in Bend, Oregon.